What is the difference between an impact driver and an impact wrench? Which one is better?

If you just look at the name of these two kinds of power tools, then you might assume that they are essentially the same tool. However, you would be wrong to think that. There are certainly some similarities between the two kinds of tools; however, there are also some key differences as well. Any prospective buyers should be aware of these differences. That is where I come in. I have used both of these extensively and I feel that I should share my experience with you so that you can make an informed purchase that works for you.

Now that it is clear, let’s see the difference between an impact driver and an impact gun (impact wrench).

For those who are in a hurry, below is a comparison table containing key differences between an impact driver vs impact wrench.

Now, let’s examine each of these powertool in detail and find out which tool is the right one for you.

An impact driver or impact drill is a power tool that can exert high rotational torque as well as hammering blows in the axial direction using an internal impact mechanism. It is a very useful tool to have, both for professionals with years of experience under their belt and for amateurs who only do the occasional home improvement project. So, what is it exactly that an impact driver does? Well, an impact driver is what you use to drive screws and fasteners into the material. You can reverse the switch and it is a very good tool for getting out screws or fasteners.

Furthermore, they can also be used for drilling holes in tough materials. Please note that if you want to drill masonry, hammer drill is the right tool. See the difference between hammer drill vs impact driver here.

What can you do with an impact driver?

Impact drivers are used for 2 purposes.

In order to give you an idea of the power differential between the two power tools, imagine driving a long self-threading screw into the hardwood. Most standard cordless drills might have some issue drilling in such a large screw. An impact driver would be able to drive that screw deep into hardwood easily. Another example would be stripped screws or fasteners. These things usually give regular cordless drills (and the people using them) conniptions. But, for an impact driver, a stripped screw is not an obstacle whatsoever.

An Impact wrench (also known as impact gun) is an excellent tool for driving lug nuts and fasteners that demand very high rotation force. When you go to a car repair shop, the mechanic will approach with an air-powered tool to change the tires. Yes, the one that makes the ‘brrrr…’ sound; it is a pneumatic impact wrench.

An impact wrench is used to either remove or tighten screws, bolts, and fasteners. Impact wrenches fulfill the same general role as impact drivers. But what sets them apart is the sheer amount of force and power that each tool can put out. If an impact driver is more powerful than a regular cordless drill, then an impact wrench is more powerful than both combined (and then some). Impact wrenches are the tools that get used when no other wrench or tool is capable of extracting a frozen nut, rusted bolts, or fastener.

Both the power tools work based on a similar principle. However, there are differences in practical application.

Despite their similar appearances, these two tools have a few key differences that everyone should be aware of.

For starters, they get used in different settings. Impact drivers are used on the vast majority of home improvement projects, carpentry projects, etc. Because of this, impact drivers are popular both with amateur DIYers and with professionals of all kinds.

Impact wrenches, because of their tremendous power, are only used in certain special professions. For example, they are often used in automobile body shops because their power allows them to quickly pop out or tighten the bolts and nuts used on cars and trucks.
In many ways, the power of the impact wrench can actually be detrimental to home projects. If you use an impact wrench on the wrong kind of screw (such as a very short one), there is a high chance that the screw will end up being overtightened. Some impact wrenches come with internal attachments that prevent overtightening, but they cost a lot more and are less common than regular impact wrenches.

Who should get each kind of tool?

An impact wrench is a specialty tool. What I mean by that, is that the vast majority of people will not need it. It is the type of tool that usually sits and gathers dust until a specific situation comes up where it is needed. Because of this, I recommend that most people go for an impact driver, as opposed to an impact wrench. Both professionals and interested amateurs will get more use out of the impact driver.

I know that the similar names of these tools can be confusing, but I hope this article has cleared up any lingering confusion and has given you a good idea of the differences between impact drivers and impact wrenches. You should now be able to purchase the tool that meets your needs and wants. 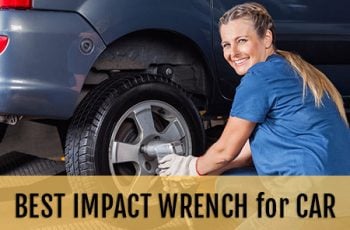 What is the best impact wrench for changing car tires? …

There are many types of powered tools that can be …