A cop saw is simple, yet powerful cutting machine used widely in metal cutting. If you are looking for a saw that has a tremendous amount of raw power, then it is difficult to beat a chop saw. But people often get confused between a chop saw and a miter saw. In this article, I will tell you everything that you will ever need to know about metal cutting chop saws.

What is a Chop Saw?

A chop saw is a machine tool with rotating abrasive wheel fixed on a hinged arm that is brought down on to a fixed workpiece to make the cut. This power saw is mainly used to cut-off workpieces into the size and hence it is also called cut-off saw or parting-off saw.

The working principle of a chop saw is that an abrasive disc that rotates at very high rpm is feed against the stationary workpiece.

How to Use a Chop Saw?

The cutting tool used on a chop saw is an abrasive disc that is fixed on a swing arm. You will clamp or hold the workpiece on to the saw table. Switch on the cutting blade (abrasive disc) using the trigger on the handle and pull the head down.

Bring the abrasive disc on to the workpiece and pass it through. Keep the on/off trigger pressed until the cut is completed and brought out of the workpiece.

When you first see a chop saw, you may notice that it looks similar in appearance to a miter saw. This is because both chop saws and miter saws have a saw blade that is mounted on a hinged arm that hangs above the saw table. Looks aside, the purposes of each saw could not be more different.

Also, a circular saw is completely handheld power tool. You move the entire saw against a work-piece. This enables you to use circular saws on very large workpieces and it is highly portable. In the case of a chop saw, the workpiece needs to be held on its table and you cannot cut a piece that is wider than the blade diameter.

As I said in the introduction, miter saws and chop saws look alike, but serve different purposes. So, what exactly are the main uses of a chop saw? For starters, one of the main uses of chop saws is to cut metal. The chop saw has the power necessary to cut through various kinds of metal, and not just sheet metal, but actual thicker pieces of metal. You can use it to cut both ferrous and non-ferrous metals like aluminum, brass etc. Now, chop saws are not the only saws out there capable of cutting through metal; in fact, many kinds of power saws (if equipped with the right blade) can cut through metal.

However, what sets the chop saw apart from these other kinds of saws is its ability to cut through hard metals and the sheer amount of metal that it can cut through. This is achieved by using an abrasive disc that rotates at very high rpm. Because of its power, a metal cutting chop saw can cut through metal quickly, enabling you to cut through huge volumes of metal in a single session.

Following are some of the most common uses of chop saws:

How about Wood, Plastic, and other Soft Materials?

A chop saw can be used to cut through wood provided you are using the right kind of blade. However, a lot of saw experts don’t necessarily recommend using a chop saw for wood cutting because it is a waste of the chop saw’s power. Why use a more expensive chop saw to do a job that a simple circular saw could do? Also, the abrasive discs that you use for metal cutting cannot be used for cutting soft materials like wood. The disc will get loaded and may break or explode.

Also, while they are powerful, chop saws are not all that accurate. So, if you need to make precision cuts on wood, then a chop saw is not your best option. For woodworking, I strongly recommend you to use a table saw or a miter saw.

Those you familiar with miter saws know that their main purpose is to make angled cuts along materials, specifically wood. You may also be curious about whether a chop saw can also make angled cuts (after all, they are built very similarly to miter saws)? Well, the answer is yes, but it is very difficult to do so. When making an angled cut you need to maintain a high level of control over the saw blade. The problem with a chop saw is that the sheer power of the blade will make it more difficult to control when doing an angled cut. Still, depending on your skill level, it is possible to use a chop saw to make the sort of angled cuts you would normally need to use a miter saw for.

Pros: On the pro side, there is the fact that a chop saw is a powerful saw that will absolutely devour most anything that you put in front of it. If you need to reliably cut thick pieces of metal, then a metal cutting chop saw is your best option by far.

Another major advantage is the speed with which you can cut through metals and other materials. Chop saws value speed and power over accuracy, so many come with things like foot switches so that you can speedily feed in metal with both hands.

Cons: I have already discussed a few of the cons of using a chop saw throughout the article, but I will reiterate them here. Firstly, chop saws can be more difficult to control, which really only matters if you are trying to make intricate, angled cuts. But, I still feel it is worth mentioning. Also, the chop saw is not suited whatsoever for making accurate cuts. Finally, be aware that it is a bit more difficult to use a chop saw when compared with other kinds of saws.

If not used with proper caution, chop saws can be dangerous. There is definitely a bit of a learning curve and I would not recommend that beginners use a chop saw until they have some more experience working with power saws.

Make sure that the workpiece is held firmly on to the bed. The cutting disc must attain the required rpm before you swing it on to the workpiece to cut. Otherwise, the workpiece, as well as the abrasive disc, can get damaged. An abrasive that breaks during operation can cause serious injuries. Trust me; you don’t want to explode a rotating disc.

Finally, because chop saws use abrasive blades (more on this in the next section), they tend to produce something called “particulate matter” which is something that you want to avoid breathing in. It is a mixture of grinding dust, metal particle and any coolant liquid you use. Most chop saws come with dust collection systems to collect this particulate matter, but it is still a con worth mentioning.

If you plan on cutting metal with your brand-new chop saw, then I would recommend that you invest in a good abrasive disc to go along with it (it likely already comes with one, but it never hurts to have extras). For those who don’t know, abrasive discs are a kind of saw blade that is ideal for cutting through the toughest materials like metal. Whereas most saw blades have razor sharp teeth along the edges, abrasive discs don’t have any teeth. Abrasive discs work essentially like grinding. The chop saw is capable of generating enough power and speed that it can actually cut through tough materials like metal by peeling-off the metal using abrasive grains.

Following are my suggestions for chop saw wheels.

General Purpose: Aluminum oxide abrasive wheels are a good general-purpose option. They can cut both ferrous and non-ferrous metals. Although the grain is not very sharp, it is tough.

Cast Iron: I would recommend you to use diamond abrasive discs to cut cast iron. They can also cut sheet metals, rebar and most metals including steel.

I strongly recommend you to follow the manufacturers guidelines on selecting the abrasive discs based on your cutting needs, the size of your chop saw and the maximum rpm of you saw.

Should I buy a Chop Saw?

Chop saws are highly useful for metalworking, construction and remodeling jobs. If you are into woodworking, you may not find this tool useful.

However, if your job involves cutting a lot of metal rods, pipes etc. then it is worth buying. If you don’t already own one, I would definitely recommend that you add a metal cutting chop saw to your collection.

I can’t stress enough how useful chop saws are. If you ever need to cut through something tough in a timely manner, then a chop saw is simply the best option available. Plus, because it’s so effective at cutting through metal, it makes a variety of home improvement projects much easier.

Are you interesting in getting a circular saw some time … 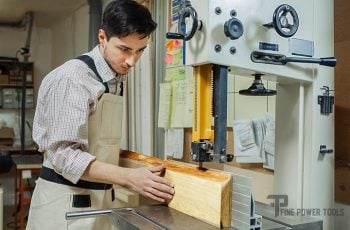 Learn what is resawing and the advantages of resawing. In …