What are the different types of compressors and which one should I buy?
If you have this question in you mind, you have come to the right place.

One of the most versatile, and I would argue most essential, tools for a handyman is the air compressor. This equipment can be used for doing such a wide array of jobs that any handyman who doesn’t have at least one in his garage or workshop is making a huge mistake. They can do everything from helping you with painting jobs to letting you fill up your tires and a bunch of other tasks.

What does that mean exactly? Well, different kinds of air compressors use different methods for compressing and transferring air. Different working principles have distinct advantages and disadvantages. In this part of the article, I’m going to go over some of the more common types of air compressors that you would be likely to see if you went shopping for them.

Broadly speaking, when you are looking at the working principles on air compressors, you can categorize them into two very broad categories.

Under these two categories, there are different types of air compressors as shown in the image below. Each has the same outcome, which is the production of compressed air. But how they produce that can differ quite a bit.

Here is the list of various types of air compressors that are most widely used.

Positive displacement compressors tend to work by taking as much air as possible and funneling it into a small area. The area is then progressively made smaller and smaller, which causes the air pressure to skyrocket wildly. This is what produces the compressed air.

Dynamic air compressors are the less common of the two. The way that they work is by forcing the air through a series of rotating elements. What this does is speed up the air, which imparts kinetic energy to it, which then translates to more air pressure. Many dynamic air compressors also actively suck moisture from the air, which again, helps to increase the amount of power.

Let me start off by talking about the different kinds of positive displacement compressors that are available out there and that you might come across when shopping.

Rotary screw compressors use 2 sets of screws that intermesh with each other. These screws are rotated and used to force the air into an increasingly smaller and smaller area. As I said earlier, this has the effect of massively boosting the amount of air pressure that the compressor shoots out.

These compressors work much the same way that rotary screw models do. The major difference being that rather than use a series of intermeshing screws, reciprocating compressors use a series of pistons to force the air out of the compressor. These kinds of compressors are also very common due to the fact that they aren’t that pricey, and they are easy to use.

As the name suggests this type of compressor work by making use of the centrifugal force of a rotating object.

How does a centrifugal air compressor work?
The core parts of a centrifugal compressor consist of a rotor (also called an impeller) that is assembled inside an involute casing. The impeller consists of blades which are also known as vanes. When the impeller rotates air enters into the casing through the eye (nozzle) of the impeller which is then pushed in a radial direction by the rotating vanes on the impeller.
Due to centrifugal force, the air is pushed towards the outer edges of the volute casing. Before reaching the volute, the air passed through a passageway called diffuser which reduces the velocity of the air and increases the pressure. In the case of a centrifugal compressor, the diverging vanes that have more volume between two vanes towards the end itself can act as a diffuser.

The result is pressurized air at the volute which is directed through the exit. When the compressed air exits from the volute it creates a pressure drop inside the casing. This will suck in more air from the atmosphere through the inlet nozzle.

The way that these kinds of air compressors work is quite genius and honestly very impressive. Basically, they draw in air and run it through a series of stages. In each stage the air is both compressed and cooled; moisture is also sucked from the air. All of these things work together to help supercharge the air and impart some serious energy into it.

This extra power really helps to make this kind of air compressor the go-to option for those who need a lot of power. Many will say that if you have a job that requires more than 250 horsepower, then you should just not take a chance and go for a centrifugal air compressor since you know that it will always have the power to do the job correctly.

While the upper limit of the compressor’s power output will vary from machine to machine, a high-end centrifugal air compressor can easily reach upwards of 6,000 horsepower. This obviously makes it a favorite among professionals or others who might need all that power.

Axial compressors are probably the rarest type of compressor as they are so powerful that they are reserved for use in things like engines and power generators. They work on the same principle that centrifugal air compressors do when it comes to generating force. The air is continually run through various stages that compress the air and add kinetic energy.

Even though I’m including it on this list, I must say that it is unlikely that most of you reading this article will actually ever need to deal with an axial air compressor. Still, it never hurts to know a bit more about these tools.

Air Compressors Based On Power Source

Another way that you can search for air compressors is by looking at the different ways that they are powered. This can be an easy way to quickly eliminate a large selection of air compressors from your search as there are only two ways to power an air compressor, with gas or electricity.

How each compressor works is fairly self-explanatory, so I’m not going to explain that. Instead, I want to focus on what the advantages and disadvantages of each type of power source are.

Furthermore, electric air compressors tend to be a lot lighter and less expensive overall. Why? Well, the fact that they don’t have to accommodate components to hold and process the gas means that they can afford to cut costs a bit and be a lot lighter.

There are two significant downsides to going electric. First off, electric air compressors obviously need to be located relatively close to a plug at all times. You could, of course, use an extension cord but most experts will warn you against using an extension cord to power very powerful tools as that can result in circuit damage.

Secondly, electric air compressors are definitely on the less powerful side. While they aren’t necessarily “under-powered,” they are noticeably less powerful than their gas counterparts. This is something that you need to consider when shopping.

A gas air compressor has basically the opposite set of pros and cons. Gas air compressors are definitely a lot more powerful on average than their electric counterparts. If you are in need of raw power for a particular job, then the chances are very good that you are going to need to use a gas-powered compressor.

As you could probably already guess, gas compressors come with some notable downsides that you should keep firmly in mind. They are pricier, they do require you to keep stocked up on gas (and deal with the disgusting fumes), and they are a bit heavier. So, the savvy handyman will have to consider whether these trade-offs are worth it for a bit more power.

Even though you might not think it when looking from the outside, air compressors actually have a lot of surprisingly sensitive internal components. These components frequently come into contact with each other and as you might guess, they start to wear out eventually. So, every air compressor has to have some form of lubrication, or else the parts will wear out. The method of lubrication is one method for separating air compressors.

While the difference in price and weight may seem like a great trade-off, there are some issues with oil-free models that need to be noted. First off, many professionals assert that the protective coating wears off quite quickly, which leads to the air compressor breaking down because the internal components eventually just wear away.

Secondly, the lack of lubricating oil means that these kinds of air compressors tend to be quite a bit noisier. This is due to the components grinding against each other with no lubrication. While you may not mind the noise, if you work in a residential area, your neighbors may not like it.

Based On Tank Design

Finally, you can roughly categorize air compressors based on the overall shape of their tank. Different air compressors come with differently shaped tanks. The benefits and drawbacks of the different types of tanks aren’t too major, but they are still worth noting.

Whereas pancake tanks are light and relatively small, hotdog tanks are shaped, as you might guess, like hotdogs. This means that they are long and circular shaped. They take up a lot more space than pancake-shaped tanks too, but the trade-off here is that they have a lot more capacity. So, you end up having to refill the tank a lot less.
This type of air compressor is recommended for impact wrenches and pneumatic power tools that require a short burst of compressed air.

Something else to consider is the overall orientation of the tank. When buying an air compressor, you can choose whether to have a model that comes with a horizontal tank or a vertical tank. The choice isn’t a major one, so don’t focus too much on it.

If you didn’t know anything about air compressors when you opened this article, then you probably know more than enough now to go make an informed purchase. If you already knew a good deal about these tools, then hopefully this acted as a good refresher for you. 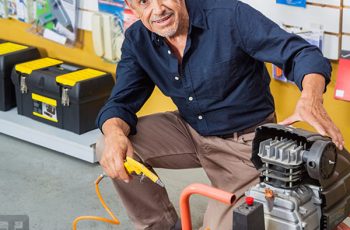 What is the best air compressor for your power tool? … 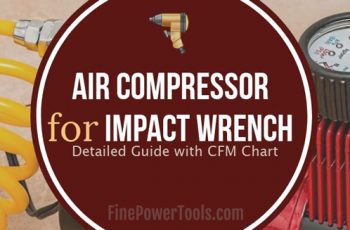