Scaffold spanner or impact wrench; what is the best tool to use for scaffolding work?
This is a matter of some debate, even among scaffolders who have been working in the industry for 30+ years. Some defend the idea of using an impact wrench to help tighten the bolts on a scaffold. Others continue to swear by old-school scaffold spanners that are specifically designed for use with scaffolds.
In this guide, I am going to try my best to take a look at this debate and look at the pros and cons of using an impact wrench for scaffolding.

Scaffolding is a temporary framework built to support the workers and the materials during construction or maintenance of buildings.

This the essential handtool for any scaffold professional. There are two main variants; the traditional box-type spanner and the ratchet wrench.

A scaffold spanner or a scaffold wrench is essentially a specific box wrench that is perfectly designed to work with the fittings found on a scaffold.
The spanner will typically be about 9-inches from top to bottom, which is the perfect length for working on a scaffold. Depending on the manufacturer and model, the length may be anywhere from 8-inches to 12-inches. It lets a regular person exert just enough torque to get the nut into place. The spanner’s length also helps to prevent any problems related to over-torquing the nut.
This handtool often comes with 6-point or 12-point sockets that will enable the worker to insert on the hexagonal bolt head easily. The box socket is usually pivoted on the handle to enable you to work at obstructed spaces with ease.

These are wrenches with ratchet mechanism. They are also called scaffold ratchet podger spanner or simply Podger.

Scaffold ratchet wrenches also often have a specially designed socket head with dual heads and a ratchet mechanism. This design gives the scaffold worker the maximum amount of flexibility when trying to turn the nut on the scaffold.

If you are reading this post, I’m guessing that you don’t need an in-depth explanation as to what an impact wrench is, so I’m not going to waste your time by explaining it. What I will do is point out that despite not being specifically designed for work on things like scaffolds, impact wrenches have become increasingly popular among scaffold workers. It has gotten so popular that many official organizations, like the National Access & Scaffolding Confederation (an organization in the UK), have actually had to issue statements about how to properly use an impact wrench for scaffolding.

But, why are some workers gravitating towards impact wrenches? In the next section, I’m going to look at some of the advantages to be gained by using an impact wrench for scaffolding.

Advantages of Using an Impact Wrench for Scaffolding

If you are familiar with both scaffolding work and impact wrenches, then you can probably already think of quite a few reasons why someone might want to use an impact wrench as opposed to the traditional scaffold wrench. The main advantages of using an impact wrench for scaffolding are more power, more speed, and less of a physical impact on the worker’s body.

It goes without saying that a tool like an impact wrench can deliver more power than a human can. No matter how strong you may be, an impact wrench is going to be able to deliver more torque than you can when trying to use a scaffolding spanner. This is one reason that some people have begun using impact wrenches instead of manual scaffold wrenches.

Having more power is helpful as it lets you quickly get fittings into place with just the press of a button — no need to spend time tightening individual fittings.

Of course, as I will explain later on, having more power can end up being both a blessing and a curse.

Much like with power, it’s also pretty obvious why having more speed when working on scaffolding is helpful. With a scaffold ratchet wrench, you have to tighten each fitting manually. While that doesn’t take too long on its own, it does add up over time. A single person can get the same job done in a fraction of the time using an impact wrench.

Having more speed is so vital in fact, that I would wager that this is the primary reason that so many scaffolders are turning towards impact wrenches. Scaffolding is a business that rewards efficiency and getting a job done in a relatively quick manner. An impact wrench helps a person to complete their job a lot faster.

Finally, perhaps the most significant benefit of using an impact wrench is the fact that it just requires less physical effort overall. A single fitting on a scaffold doesn’t take a lot of effort to put into place, but it does add up over time. It is not uncommon for scaffolders, after decades of work, to have some pretty serious physical issues. Things like chronical muscle pain, perpetually sore backs, wrist injury, and other nagging physical problems like that are a predictable side effect of using a scaffold wrench (handtool) for decades.

This just isn’t a problem that scaffolders who use an impact wrench have to deal with. The impact wrench ensures that there is basically no physical impact on the body when working on a scaffold.

Cons of Using an Impact Wrench

As I said earlier, I don’t want to give you the false idea that using an impact wrench for scaffolding is perfect, because it isn’t. In fact, the National Access & Scaffolding Confederation that I mentioned earlier still recommends using a traditional scaffold spanner. What are some of these downsides? Well, there is a risk of applying too much power when using an impact wrench, there are noise and vibration issues to consider, and technical issues to consider as well.

Too Much Power (Over Torquing)

One of the major concerns that many scaffolders have when it comes to impact wrenches is applying to much torque to a fitting. A standard scaffold fitting requires about 50 N/mtr. (Newton Meters) of power to be tightened perfectly. Most impact wrenches will typically deliver torque levels far in excess of that. This can lead to things like stripping the fitting or other issues.

This isn’t a problem with a scaffold ratchet wrench because as I said before, a spanner’s length is optimally designed to allow a person to apply just the right amount of torque. So, there isn’t a risk of stripping the threads by applying too much power.

This doesn’t mean that you can’t use an impact wrench; it is just another problem that a scaffolder has to be wary of when working. Care should be taken to ensure that the chosen impact wrench doesn’t give off too much torque when used.

Impact wrenches can be very noisy, and they also cause vibrations to go through your arm. Both of these are minor annoyances at first, but over the years they can add up in the same way that the physical exertion of using a scaffolding spanner can add up.

For example, exposure to the noise of an impact wrench can eventually lead to hearing issues like tinnitus or even minor hearing loss. Similarly, having vibrations constantly shooting up your arm for years can cause a disorder known as “Hand Arm Vibration Syndrome,” which results in joint and muscle pain.

Much like with the power issue, the issues surrounding noise and vibration don’t prevent you from using an impact wrench for scaffolding work. But they are something else that you need to consider when planning a job. You have to invest in protective gear that you wouldn’t have to spend money on if you were using a scaffold ratchet wrench. I wouldn’t worry about it too much, though since earplugs are relatively inexpensive.

Finally, one also has to consider that you need to go with battery-powered impact wrenches. The air-powered tools are not an option for scaffolders.

If you are like me, you have probably had a power tool run out of juice in the middle of a job. Usually, it’s just an annoyance. But, when doing scaffolding work, it becomes a more significant issue. That means you should carry extra batteries, which is additional weight.

Can I use an Impact Driver for Scaffolding?

Now the impact driver may sound like the perfect solution, but there is another problem.

The impact driver comes with a ¼” hexagonal socket. So you need to get a socket adapter that adds to the length of the tool.  Look at the comparison image below. As you can see, the impact driver has a stubby head that can easily reach difficult areas. The impact driver with its longer body may not be convenient to use.

Furthermore, the presence of clutch adds extra weight to the body of impact drivers. I have written a detailed comparison between an impact wrench and impact driver here.

Conclusion: Should I get an Impact Wrench for Scaffolding?

My advice is to get one.

If you are unsure, rent an impact wrench or borrow from a friend and try it. Even if you prefer the good old spanner for building a scaffold, I am sure that you will love the impact wrench for dismantling the staging. 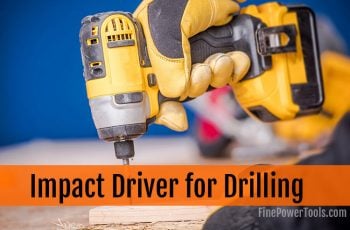 Can I use an impact driver for drilling? 3 Things … 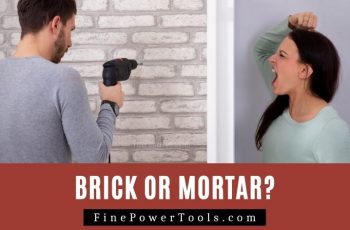 Should you drill into brick or mortar for TV mounts, …