Although you can find nail guns that run on gas canisters, the vast majority of nail guns are powered through the use of pneumatic or electric power. Now, when you are buying a nail gun, your chief concern probably isn’t how it is powered, but it should be.

Both pneumatic and cordless nailers have their own set of pros and cons that you need to be aware of. In this comparison guide, I will explain you about the various differences between the two kinds of nail guns, As well, I will also detail what pros and cons of each kind are.

The m advantage of a pneumatic nail gun is the amount power it can exert whereas the major benefit of cordless nailer is its portability. Below you can see the comparison chart that explains the major differences between the two power nailers.


*The cost of pneumatic nail gun is cheaper assuming that you have an air compressor.

Now let us see a more detailed comparison between the two power nailers.

What is an Electric nailer?
Electric nail guns, as the name suggests, are powered using an electric cable or battery (cordless). The voltage of the battery varies greatly depending on what nail gun you buy. Some nail guns opt to have larger batteries, which makes them more powerful, but also bulkier. Other nail guns opt for smaller batteries to increase maneuverability at the expense of power.

Cordless nail guns are very popular, especially among amateurs, because they operate off battery power as opposed to a more cumbersome power source, like compressed air.

Corded models need to be plugged into an outlet to operate. On the other hand, cordless models operate entirely off battery power. Depending on the kind of electric nail gun, you will need to either charge the battery or replace it when it runs out.

A cordless nail gun is very easy to move around with when compared to pneumatic nail guns. As you can guess cordless electric nailers don’t have any cords, wires, or hoses to inhibit movement. This makes them very popular on large job sites, where easy movement is valuable.

For instance, consider the work of a roofing contractor. A cordless roofing nailer makes his job way more comfortable when compared to an air nailer.

Now, you might think that doesn’t apply to corded electric models, but you would be wrong. While corded models are not as maneuverable as cordless models, they are still a lot easier to move around with when compared to their pneumatic counterparts.

Another major advantage of an electric nail gun is quicker setup time. With an electric model, you either just put in the battery or find the nearest plug, and you are ready to go.

Because they run off battery power, the amount of force that an electric nail gun can generate is going to be limited. Also, the fire rate of electric nailers is limited. When compared with other kinds of nail guns, electric nail guns (both cordless and corded models) shoot significantly fewer nails per minute.

Finally, the battery pack adds extra weight and bulk to the power tool. This is not a big deal when working with a lighter nail gun such as a brad nailer or a pin nailer. However, the extra weight could cause fatigue in case of larger nail guns such as framing nailers.

Assuming you already own an air compressor and you don’t work anywhere besides your garage or workshop, then a pneumatic nail gun is both cheap and easy to set up. Just screw the hose onto the bottom of the nail gun and you are ready to go.

Of course you can get a portable air compressor for nail guns since nailers doesn’t require lot of CFM. However, if you have lot of nails to drive a small portable compressor may not be sufficient.

Likewise, if you move around a lot, then setting up the pneumatic nail gun can be a hassle. You have to find a place to plug in the air compressor, and then you have to actually set up the compressor.

Comparing the two types of nailers

Now that you have seen the pros and cons of both types of nailers, let us compare the tools to find out which is best for you.

In terms of efficiency and power, pneumatic nail guns are the best option. However, I will say that unless you are a professional carpenter or woodworker, cordless nail guns will have more than enough power to meet all your needs.

When it comes to performance the air nailers have faster firing rates. They are quick and fire as soon as pull the trigger assuming that you have a decent compressor. The battery powered cordless nailers often has a slight delay between the trigger actuation and actual nail firing. However, most of the newer models have vastly improved performance.

You should also know that some of the cordless models have heating problem when fired in quick succession for a long time.

Really, the only area where I would say that electric nail guns have a decisive advantage is in ease of use. I can’t understate how useful it is to not have to lug around an air compressor. It is also nice to not have to worry about tripping over hoses.

Conclusion
What is the best nail gun for home use?
If you have an air compressor at your garage go for the pneumatic version. For everyone else a battery powered cordless nailer is easy to use and produces less noise which is important for home users.
For professionals I would recommend you to get both. You need the pneumatic version for heavy duty work such as framing, building decks etc. On the other hand the cordless version will offer you a lot of portability when comes to trims, roofing, etc.
I hope that this has answered all the questions you have about pneumatic and electric nail guns. If you were on the fence as to which to buy, this guide should give you enough information to make an informed decision. 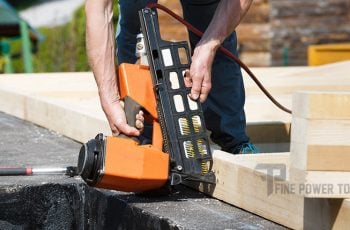 Framing nailers and finishing nail guns are two of the …

What size finish nailer or brad nailer do you need …