Now, even though they are a kind of power saw, they are probably one of the less common ones out there. This is because most people aren’t cutting through concrete or asphalt on a regular basis. However, they can be useful tools to keep around to do masonry work, even for amateurs. In this article, I am going to introduce you to the world of concrete saws and tell you what you need to know about these power saws.

What is a Concrete Saw?

A concrete saw is a power tool that is used to cut through concrete, brick, asphalt, masonry, etc. The concrete saws are specifically designed to withstand heavy cutting load and is dustproof. The wet concrete saw is also waterproof which ensures that the electric saw is safe.
While you can use a regular power saw to cut through harder materials, you are going to wear out both the blade and the motor very quickly, leaving you with a very expensive paperweight on your hands.

In this section, I am going to explain what the main uses of concrete saws are.
The main use of a concrete saw blade is to cut through tough materials such as brick, masonry, and asphalt. It is often used on construction sites or on major building projects, where there is often a need to cut through large amounts of tough concrete or brick.

If you have ever built a house or seen one being built, then the chances are good that you have seen a concrete saw in action. Concrete saws are especially valuable on housing projects because of their ability to cut through masonry.

First off, I want to clear up a misconception that some of you may have. While any type of power saws that can accept a diamond blade may cut through concrete, we do not call them concrete saws.

There are two types of powers saws that are specifically designed for concrete cutting. They are,

You can find several variations of these tools, from the hand held masonry saws to massive concrete saws with hydraulic motors and feeds.

In addition to the two types concrete saws mentioned above, the following power tools can be used for cutting concrete and masonry.

While it is possible to cut small concrete blocks or tiles with these power tools, I strongly recommend against it. Mainly because of the safety issues associated with it.

Depending on the power source used, there are mainly two kinds of concrete saws.

Gas-powered saws are very mobile. Because you don’t have to worry about plugging them in, they can be used just about anywhere. This makes them very popular on construction sites where electric infrastructure often hasn’t been laid down yet. Also, because gas power tends to be more effective than electricity, gas-powered concrete saws tend to be more powerful than their electric counterparts.

However, there are some notable downsides. For starters, gas-powered concrete saws, like any gas-powered tool, produce fumes. This means that you can’t really use the saw inside in an enclosed area for very long, otherwise the fumes will build up and cause damage to your health. Likewise, gas-powered concrete saws produce a lot more debris than electric ones, which again makes them better suited for outside work.

Finally, because gas-powered concrete saws require you to regularly buy more gas, they end up being quite expensive in the long-run. Initially, they cost about the same as an electric concrete saw, but as the years go on, the costs begin to add-up.

Electric concrete saws have a few advantages of their own. Since they run off electricity, you don’t need to worry about buying costly replacement fuel. This helps to keep costs down significantly in the long-run.

Obviously, there are a few downsides to electric concrete saws. They tend to be less powerful than gas-powered models. Likewise, the reliance on electricity means that you are limited to working in areas with electric infrastructure like wiring and outlets already in place.

Picking the right saw blade for your concrete saw is as important as picking the saw itself. There are a few ways to divide and categorize concrete saw blades. In this section, I am going to cover some of the more common ways of doing so.

One of the main ways of categorizing the different kinds of blades is by breaking them up into two different categories, those that have diamond blades and those have abrasive blades.

A regular steel blade or even a carbide tipped circular saw blade cannot penetrate into masonry. You need an abrasive wheel or diamond blade to cut concrete.

Abrasive corundum blades use friction to effectively “grind” away material much like a grinding wheel. Therefore, they work a bit differently than most other kinds of power saws (with the exception of chop saw), which use razor-sharp teeth to actually cut through wood.

Pros:
The abrasive blades are inexpensive. They are a good choice for occasional light duty masonry work that require only shallow depth of cut.

Cons:
When do concrete cutting with abrasive wheels, the blade wear down very fast. Because of this, in the long run you will have to spend more money than a diamond wheel.

Another important fact is the depth of cut. With abrasive wheels you can’t penetrate too deep, or else you risk shattering of blade which can be fatal.

These blades have diamond-tipped teeth that physically cut through hard materials. As you know diamond is one of the hardest materials on earth and it has the ability to penetrate through tough substances like concrete and asphalt.

The diamond concrete blades have solid construction with metal core (steel disc) and diamond crystal at the rim. The artificial diamond crystals are attached on the steel disc by laser welding or soldering.

They have less wear when compared to abrasive blades.

Faster: The ability to penetrate more deep together with lower wear enables the diamond blades to cut concrete in nearly half the time.

Another major distinction lies in the difference between segmented blades vs continuous blades.

Segmented blades are blades that have teeth and relief on the periphery whereas a continuous blade has none. One thing to note is that while I have used the terms segmented and continuous, you will also often see the terms “dry-cut” and “wet-cut” used; all that is referring to is whether you need to use water to cool the blade or not.

A segmented saw blade can cut through the material instead of grinding it away. Because they are serrated, there are spaces in between each tooth. This means that the air flowing in between the teeth automatically cools the saw and also provides sufficient space for dust removal. Because of this, you can find that segmented diamond wheels are used in dry cut saws.

Continuous saw blades don’t have any spaces. This means that they grind away material rather than cutting it. It also means that whoever is using the saw has to take care that it doesn’t overheat. Because there are no spaces there is no airflow to cool the saw. Usually these types of concrete saw blades are used in wet saws, since continuous saw blades need to be cooled with cold water while being used.

The rotational direction of the saw blade can be confusing, especially when you use different kinds of saws. For example the circular saw blade direction is different when compared to table saw.

For a concrete saw the blade direction is in the same direction of feed.

Tip: While using a handheld masonry saw, always make sure that you use the cutting blade’s lower quadrant to minimize the kick-back.

Conclusion
As you can see, concrete saws are incredibly useful power tools to keep around. Using this guide, you should be able to pick out the concrete saw that best meets your needs. 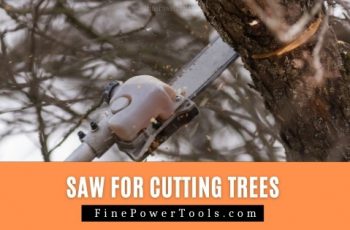 Here are best hand saws and power tools to trim, …

How to cut metal on a miter saw? See the …