What is a door jamb saw, what are its uses and which brand is the best?

If you are like many people (even including many power tool enthusiasts), then you probably aren’t familiar with jamb saws in the slightest. This article should be a useful guide that will tell you enough information to make you an expert on jamb saws overnight.

What is a Jamb Saw?

A jamb saw is a special-purpose electric power saw that is designed to make undercuts around door jambs (casing at the bottom of the door). You will do these undercuts to slide in the laminate or wooden flooring below the door casing which will give it a clean appearance. Hence, they are also called undercut saws.

A jamb saw or an undercut saw is essentially a circular saw with its blade mounted on an arbor that is perpendicular to the body of the tool.

Do you know those solid casing under doors? Well, those can often interfere with putting down laminate and other floorings, which is obviously very annoying.

However, the way that most door casings are designed makes it very difficult for regular saws to get at them. Enter the jamb saw. While this does have some versatility (as most power tools tend to), this is a saw that is primarily designed with one application in mind, which is the removal of the bottom of these door casings.

You can use this power saw to cut toe-kicks, make undercuts at the fireplace, etc.
While you could presumably use a door jamb saw for some general cutting jobs (mainly because of the blade quality and the way that it is designed), that really isn’t what you get this tool for. The main use (and really the only use) for a jamb saw is removing door casings so that you can get laminate put in. There isn’t really any other reason to invest in a jamb saw besides that reason. Anyone who tells you differently probably hasn’t used a jamb saw before.

How does jamb saw work?

The way that the tool works is very simple.
Every jamb saw comes with a setting that lets you adjust the depth on the tool until it matches the thickness of your floor. Then, you simply turn on the tool and begin cutting the door casing. You keep going until you get to the point where you can comfortably fit in the laminate or flooring that you are trying to install.

You may have to use a chisel to remove a little bit of material from the corners.

The main advantage of buying a jamb saw is quite simple. It is by far the best tool that you can find for cutting around door casings. Simply put, when it comes to undercuts no other tool can even come close to doing what a jamb saw is capable of. You can try other saw tools like reciprocating saws or oscillating multi-tool, but they just aren’t going to work as well as a jamb saw.

As for cons, the biggest one that comes to mind is the same disadvantage that applies to pretty much every specialty tool, including the jamb saw. Because the tool is meant to fill such a specific niche, it probably doesn’t end up getting a whole lot of use.

If you are a contractor, then of course investing in a jamb saw is a no-brainer because of how well it does at what it is designed to do. However, non-professionals may have to think long and hard about whether it is worth it to invest in an undercut saw, as they might not get a lot of use out of the tool. In situations like this, renting the tool might be the best option.

How to Use a Jamb Saw to Cut Door Jambs?

Cutting door jambs is a pretty simple procedure that basically anyone can do with the right tool and a bit of preparation.

Here are the basic steps you should follow when using a jam saw.

It is that easy and that quick. However, you must exercise extreme caution to avoid injuries and accidents.

Whenever you are dealing with a power tool that has a blade-like the one on the jamb saw, you need to take some extra precautions.

First off, you need to make sure that there is nothing that could get into the blade’s way and jam it. This could cause catastrophic tool failure.

Secondly, you need to be careful about flying woodchips and other debris. Use a dust cover and connect it to your shop vacuum that can suck the dust.

As the blade dulls, it becomes less likely to cut the door jamb cleanly and more likely to start sending debris flying at your face. So, make sure you have eyewear.

Now you should have all the information that you need to determine if a jamb saw is right for you. 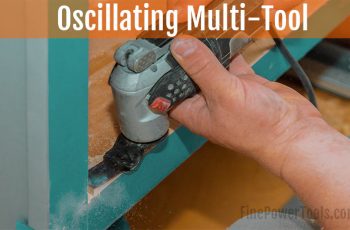 This guide explains what is an oscillating multi-tool and what … 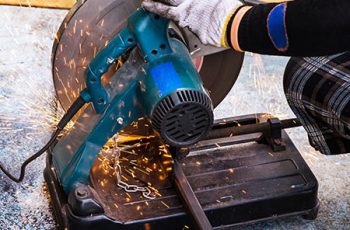 A cop saw is simple, yet powerful cutting machine used …