They are both grinders, but each tool fulfills a very different and essential function in your tool shed. So, what is the difference between a die grinder and an angle grinder?

In this article, I’m going to explain what each tool is and what the major differences between the two are.

Here is a comparison chart between the two grinders.


A more detailed explanation of these differences can be found below.

What Is a Die Grinder

A die grinder is a relatively small, handheld tool that can do a wide variety of different jobs. Depending on what attachment you are using, you can use your die grinder to polish surfaces, cut through material, smooth out rough edges on wood or metal, grind away rust, sharpen blades, and much more.

The list of attachments that can be used with a die grinder is truly impressive, and it speaks to how versatile the tool is. If I were stocking my tool shed from scratch, I would definitely make sure to include a die grinder because of how versatile it is.

What Is an Angle Grinder

Angle grinders fulfill a similar role to die grinders, but there are enough differences to justify them being classified as a separate tool. Angle grinders are large, but still, handheld tools that are equipped with a disc. The disc that spins at very high speed acts as the cutting tool.

Equipped with the right disc, one can use their angle grinder to cut through material like metal or wood with ease, you can use it to grind down material, and you can even use it to polish surfaces. Here is a list of angle grinder uses to understand the utility of this power tool.

So, much like die grinders, angle grinders are fairly versatile tools that can fit comfortably into any tool shed or garage. I wouldn’t call them essential tools by any means, but they are certainly beneficial.

9 Differences between the two tools

Alright, so I went over what each of these tools does. Already, you can see some of the similarities between the two. They are both versatile, and they can both be used for polishing, grinding, cutting, etc. However, what are the differences between the two? Well, that is what I’m going to cover in detail now.

The primary difference between these two power tools is the design of the device.

An angle grinder is designed to work with thin abrasive discs. These discs are mounted on a rotating spindle that is at right-angle to the body of the tool. You can use the face of the disc for grinding and polishing while the periphery of the disc to do the cutting.

On the other hand, a die grinder is a rotary tool designed for cylindrical cutting bits. These bits mainly utilize their peripheral area for machining. For example, carbide burrs.

In case of a straight die grinder, the cutting tool is in line with the body. There is also a right-angled version of this tool. You can see the difference between the straight and right angle die grinder here.

Two of the biggest areas where these tools differ is in the areas of speed and power. As I said earlier, angle grinders are a lot bigger. Because they are bigger, they are able to hold a much larger motor. You can probably guess where I’m going with this. A bigger motor means a lot more power. Although the exact difference will vary based on the tool, generally, angle grinders are roughly double the power of die grinders.

If you look at the motor power the die grinders are less than 1 HP whereas the angle grinder motors are rated in the range 1.5 to 5 HP. This extra power comes in handy in a variety of situations. For example, the extra power makes it really easy to quickly cut through material or smooth out material.
While the die grinders are more powerful than Dremel tools, they cannot compete with the sheer cutting force of angle grinders.

Die grinders are designed for precision work. They offer better control and maneuverability over the cutting action.

Conversely, the angle grinder is a rough tool with brutal power.

Speed is an entirely different scenario, however. Die grinders are smaller than angle grinders, which also means that they are a lot faster. Generally, the speed ranges from 15000RPM to a maximum of 30000 RPM.

The speed difference may not be that noticeable at first, but if you were to directly compare the speed of a similar attachment on both tools, you would see just how much faster the die grinder is. The higher rpm enables the tool to work with small carbide burrs, diamond bits and mounted point wheels similar to Dremel bits.

5. Angle Grinder is better for cut-off

With angle grinder, it is not only easy to do the cut-off operations but it is also safe. The safety guard on the tool prevents the shattered pieces of exploded abrasive discs from flying everywhere. And trust me, this happens more often than you think especially when cutting tough materials such as steel.

You can use a cut-off wheel on a die grinder to do small cutting jobs. But they are not designed for such tasks as it is evident from the absence of safety guards. If you need a straight rotary tool with a cut-off wheel, check out the cut-off tool with a guard.

Die grinders, on the other hand, are mainly air powered. Plenty of die grinders also use battery power, but only corded electric die grinders are not so popular.

The angle grinders are designed to work with large diameter discs when compared to mounted point tools on die grinders. The disc which is fixed on an arbor that is perpendicular to the body covers a larger surface area. This enables them to complete the work faster.

Since the angle grinder discs have a flat cutting surface, it works better on flat surfaces. They also work well on external curved surfaces that span across a large area. For example, you can use an angle grinder with a buffing wheel to polish a car body.

On the other hand, die grinders are ideal for grinding and polishing holes, sharp curves, complex internal profiles, etc.

Don’t get me wrong, angle grinders are great, and they are a useful part of any tool shed. However, when it comes to pure versatility, die grinders are miles ahead. Angle grinders are generally used for cutting and grinding (though there are other applications that they can be used for as well).

Conclusion: Which tool is better?

Ideally, you should have both the tools since they are best for different jobs. But you are here to find out which one is better for your job. So let me wrap it up with my recommendation.

Get an angle grinder if,

You should buy a die grinder in case,

When choosing between rotary drills, a lot of the consideration … 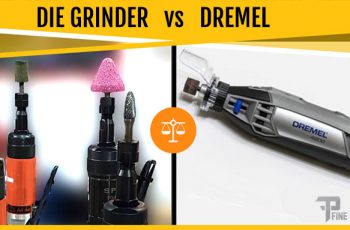 In this tool vs tool comparison, you can see the …