When choosing between rotary drills, a lot of the consideration will come down to going with a cordless or corded model. The Dremel 4300 and 8220 are similar devices in many ways. But there are some important differences.

The primary difference between the Drmel 4300 and 8220 models is that, the 4300 version is coded whereas the Dremel 8220 is cordless. There few other distinctions in terms of tool bit holding, amperage, price, size and weight.

The key differences between Dremel 4300 and the cordless Dremel 8220 are as follows.

Like any other cordless power tool, the Dremel 8220 cordless rotary tool also offers better portability and ease of use over the corded 4300 model.

If you are a hobbyist or DIYer you will love the convenience of the cordless model. When you want to fix your door lock, or kitchen cabinet hinge, the ability to grab and switch-on the tool and start working directly is a big plus.

If you are a professional locksmith or an artist working on large models, cordless is a better choice.

This is a big one. The Dremel 4300 is the first model with a tool-less clamping system. The self-centering 3-jaw chuck can accept Dremel tool bits with different diameter shanks and changing the bits is a simple and easy process.

The earlier models including the 8220 utilized collets to hold the tool bits. This was a kind of a limitation since you will have to swap collets for different diameter shanks. However, the built-in EZ twist nose cap found in Dremel 3000 and 4000 is also available in the cordless 8220.

While the 8220 has a warning indicator that will flash when the unit is overheating, the 4300 has built-in stall protection that will shut off the machine when it does overheat.

The battery overheat warning is indicated by the fuel gauge. When all the three indicator lights are flashing, it means the battery temperature is not normal.
The overheating issue is important because the warning indicator on the 8220 lets you power down for several seconds to a few minutes to let the device cool down. While it’s possible that the 4300 will shut down in the middle of a job without as much warning.

The corded Dremel 4300 has a slightly more powerful motor with 1.8 amps whereas the cordless version has an amperage of 1.5 amps.

The corded Dremel 4300 has a 360° pivotable LED light which is very convenient when working in hard-to-reach areas and dark areas. Holding a flashlight on one hand and the rotary tool, on the other hand, is not a pleasant experience.

If you are mostly working inside a well-lit area or shop floor, this shouldn’t matter to you.

Usually, while the absence of an electric cord offers convenience, the addition of a battery adds extra weight to the tool. But in this case, Dremel managed to keep the weight down on its cordless model.

The similarities start with the motors for the 8220 and 4300 being quite similar. They are compact and quite powerful with the same speed range. In addition, the gripping system is similar as well, which is why both score high in terms of ergonomics.

Being cordless, the 8220 has the advantage because you are not having to move or jostle the cord around when operating the device.

This is a neat little feature that is available in both models. It is possible that you could accidentally press the shaft lock button when it is still spinning. This will damage the locking pin or the teeth that are machined on the spindle.

With the new models, when you actuate the ON button into position, it goes inside a little recess in the spindle shaft lock button effectively stopping it from going down.

Dremel Cordless Vs Corded: Which One Should I Get?

Which one to get will depend in part on whether you mind has a corded rotary tool or are willing to work with a cordless version.

Being cordless translates to being less cumbersome. Plus, the 4300 can get hot when used for a long time. So for most uses, the 8220 is just as good as the 4300 with the added benefit of being cordless.

The bottom line is that unless you are working all day, the cordless version is generally better in terms of ease of use.

The 8200 is quite similar to the 8220 which superseded it, but the most important difference is the 8220 features a motor that is higher in performance output. Plus, the 8220 uses a 12VMAT lithium-ion battery which runs 33% longer compared to the 8200. The bottom line is that the 8220 can do everything the 8200 can and last longer while offering more power. And do not forget the superior cool-down system that when used properly keeps the device operational.

If you are someone who doesn’t want to mess around with a power cable and extension box, you may be better off with the 8220 with an extra battery to change out when needed.

Can a Dremel overheat?

I have seen people complain about the overheating issue with both corded and cordless Dremel models. In my experience, the Dremel rotary tools do get heated when used continuously for an extended period of time.

If your unit is getting heated very quickly, here are few tips.

Similarly, if you run the tool at 35,000 RPM for a long period of time, the motor can get heated.
Try to use speeds between 10,000 to 25,000 RPM. If you have to go to extreme speeds, dial it back to medium speeds or switch off the tool for a couple of minutes.

Why did my Dremel stop working?

The Dremel 4000 series has a thermal-fuse and stall protection which will stop the tool from working to prevent excess heat causing damages to the motor. Allow the device to cool down and try to switch on again. If you still can’t get it working, follow the steps below.

First, check the carbon/graphite brushes. According to the manufacturer, the brushes last anywhere from 50 hrs. to 100 hrs. of working time. It is easy to unscrew and replace the two spring-loaded brushes.

You can get the replacement thermal fuse and change it yourself. There is no need for soldering. All you need is a Torx key to open the rubber molded case.

Why is my Dremel battery not charging?

First, check if your battery pack is too hot or too cold.

The battery pack is designed to work within certain temperature range. In the case of 8220 it is between 0 to 45°C (32°F to 113°F). If you own a different model, please refer the user manual for this information under “Important Charging Notes”.

Remove the battery from the charger and allow it to come back to normal temperature before you try to charge again.

You might also want to check battery and charger terminals for any dirt. Unplug and clean the terminal with alcohol.

If it is still not working or the battery is getting drained within few minutes of working, may be it is time to get a new battery. Unfortunately, the Dremel battery packs are expensive. There are generic knockoff batteries available from third party sellers. But keep in mind that, using such batteries would void the tool’s warranty.

Tip: Unplug the fast charger after you finished charging the batteries. If you leave the tool on the plugged charger as a storage spot, you will end up replacing the battery often.

Why is the light on my battery charger blinking?

The green indicator lights on charger will keep flashing during the battery charging cycle. Once the battery is fully charged the green lights will stop flashing and will be on.

Die grinders 101. This ultimate guide explains what are doe … 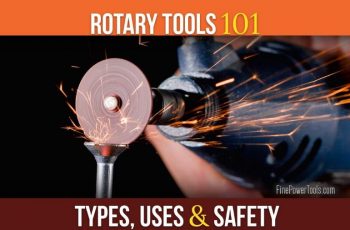 All about Rotary Tools. What are they and what can …